Welcome to summer and our Spring Whisky Week!

Tonight we are hosting our annual Spring Single Malt Festival which is another sell out. We have probably our best line-up of whiskie ever, with more than 120 on offer. Tonight we will be launching a number of new whiskies on to the market, like the Isle of Jura Prophecy one of our latest exclusives. We also have an advance bottle of the Shackleton Whisky—Mackinlay’s Old and Rare Highlan Malt. This is a meticulous recreation of a whisky discovered under Shackleton’s hut in Antarctica. We will be the exclusive retailer of the Shackleton Whisky in Alberta, and are taking pre-orders for it. (I will include some pre-order info on the Shakleton Whisky in the next full Malt Messenger) There are also a slew of other new whiskies to showcase from Signatory, Edradour and a number of other producers which I will write in detail about in the next Malt Messenger.

As part of our whisky week I am hosting a special whisky dinner tomorrow night at Buchanan’s Chop House, I am calling it the Peat Monster Dinner. Participants will enjoy a three course meal and six heavily peated whiskies including three single cask single malts from Kilchoman Distillery. Last year three casks of Kilchoman were sold to North American Retailers, one to Binny’s Beverage Depot in Chicago, one to the Whisky Shop San Francisco and the other one too… you guessed it the Kensington Wine Market.  I’ve acquired a bottle of each of the Whisky Shop and Binny’s bottlings, and we will sample these rare single malts next to the Kensington bottling. The dinner will also feature a whisky from Port Ellen and the Ardbeg Supernova 2010 and another unnamed single malt. The cost for the dinner is $120 + GST. It includes a three course dinner, six whiskies and gratuity!+

Finally, Father’s Day is nearly here.  Happy Father’s Day to all you father’s and grandfather’s out there. Below you’ll find a copy of my Father’s Day gift guide. I hope it comes in handy!

1. Jim Murray’s Whisky Bible 2011 – A dense tome of whisky musings, tasting notes and pointed personal opinions on whiskies from all over the world from one the industries foremost critics.- $21.99

2. Malt Whisky Yearbook 2011 – A great resource on the Single Malt Scotch Whisky Industry with in-depth descriptions of all active distilleries and what happened in the industry over the last year! – $29.99

5. Nikka From the Barrel – I’d call this whisky cute, but you might not take it seriously… this cask strength little Japanese whisky is sublime and comes in a handsome little square bottle. – $53.49

2. Glenmorangie Sonnalta PX – One of the most lovely noses you’ll ever sample, and a very soft complex palate. This KWM exclusive is currently our best selling whisky by a long shot! 96pts  Jim Murray. – $74.99

3. Bowmore Tempest 1st Edition – Over the last year and a half this is our best selling single malt, and it was just awarded Best Islay Single Malt Whisky in the World Whisky Awards. – $81.99

4. Arran KWM Bourbon and Sherry Casks – A couple of times a year the Kensington Wine Market selects a barrel to be bottled exclusively for our store. We review a selection of barrel samples and with the assistance of some select customers we choose on exceptional cask.  This time things went a little bit sideways, we were unable to decide between one rich bourbon barrel and a superb sherry cask, SO we decided to do both! Our Bourbon and Sherry cask Arran bottling are each from a unique single barrel, bottled at natural cask strength, without chill filtering or added colouring.  Like a proud father unable, nae unwilling to decide which child he prefers, you’ll have to decide for yourself which is the better whisky! – $84.99 / Each

5. Duthies Ardbeg 16 Year – From a single cask bottled at 46% without added colouring or chill filtering; 1110 bottles. The whisky is a
classic mature Ardbeg with soft oily peat, earthy spices and sweet vanilla! – $91.99

1. Glendronach 1995 KWM PX – Our Glendronach single cask PX Sherry Puncheon is one for the ages, sweet, chocolaty and soft with fruit and spice notes. It has yielded 682 individually numbered bottles at a cask strength of 52.2%, fewer than 125 left! – $114.99

2. Kilchoman KWM Fresh Bourbon Cask – KWM is the first store in Canada and one of only 3 in North America to be given the privilege of bottling our own cask of Kilchoman, Islay’s newest and most exciting single malt. Less than 50 of the 260+ bottles left! – $114.99

3. Tullibardine Gold Medal Marketing Cask 1987 – Bottled for the Alberta Importer this cask is sublime, rich with very soft sherry notes. Plus $5 from each bottle sold by Kensington Wine Market will go to the Children’s Hospital Aid Society. – $131.99

1. Signatory Glen Albyn 1981 – A very soft whisky from a little know closed distillery.  I have only seen one other bottle from this distillery come into the store over the last 9 years. – $173.99

3. Glenmorangie Signet – This is one of the most interesting and unsual whiskies in the store. Made from chocolate malt and very old sherry cask whiskies. It is decadent! – $226.49

5. Signatory Glen Mhor 1982 – This whisky from a long lost Inverness Distillery is intriguing with multiple layers and facets to it. Exclusive to KWM! – $234.99

2. Pittyvaich 20 Year – Early reviewers have highlighted the whisky’s nose as being exceptional. The whisky is also exceptionally rare, this being only the second ever official bottling and the oldest. 6000 bottles worldwide. – $269,69

3. Port Ellen 29 Year 8th Release – This 8th official release of Port Ellen is 29 years old and is already sold out in Europe. Distilled in 1978 only 6,678 numbered bottles were released World Wide of what is expected to be one of the final official releases. – $361.99

5. Glenfarclas 40 Year – Only Glenfarclas could release an official 40 year old single malt for less than $500. Malt Advocate gave it 96pts
and called it “Scotch Whisky of the Year”, Whisky Mag named it “Best Speyside Whisky!” – $499.99

3. Glenfiddich 40 Year – This retooled 40 year old comes in a beautiful box you can lock with a key, lest you should be tempted to dip into it at an inopportune time! – $2729.99

4. Bowmore White 1964 – One of the three whiskies in the legendary trilogy. By far the softest and creamiest of the three but still retaining the trademark tropical fruit notes. – $4388.99

The latest (from Ardbeg Committee email):

For many years it has lain brooding and untamed in Warehouse 3. Now in the
deep south of Islay a new breed is ready to be released into the wild.

But while the much-anticipated Committee bottling of Ardbeg Alligator has
emerged, sadly due to European tax laws, it could prove to be a rare breed in
some parts.

Unfortunately, your country is one of those we are unable to ship whisky to
due to these laws. But the good news is that Alligator will be available on
general release from 1st September at your usual outlets. Ferocious ‘alligator’
charring of new American white oak casks has created a spicy, dark dram of
hidden depths, within which lurks deep tarry coffee, barbecue sizzle and sooty
aromas.

An expression that may prove a challenge to the unwary, it is set to test the
palate of even the most hardened Ardbeg adventurer. So be careful, its unique
spicy bite may catch you unawares…

In the meantime, why not discover the Islay-gator’s tale for yourself at ardbeg.com/gator. It’s powerful stuff… 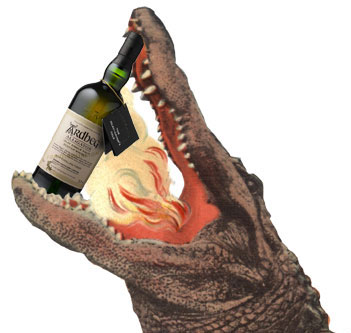 Friends & Resources (Check These Out)